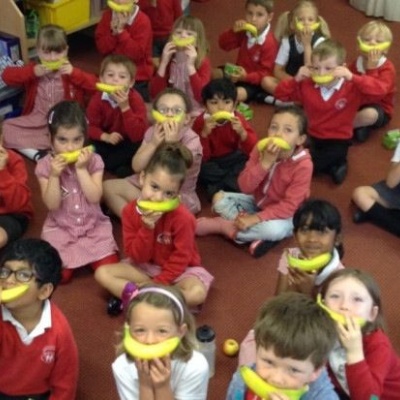 Pupils at The Hills Academy have gone bananas after winning £ 100 in a national competition.  The Bedford school was runner up in the competition run by Seafarers UK and Fyffes the fruit provider.  Seafarers UK is a charity that supports the UK maritime community,  seafarers and their families.  A campaign was launched in association with Fyffes, to encourage children between the ages of five and seven to think about the journey a banana makes to get to their lunchbox - using Freddy Fyffes, a lovable banana character.  To enter the competition The Hills Academy submitted a photo of the pupils with bananas.  The school received the £ 100 cheque this week and it will go towards school supplies.  The children were also treated to a banana treat from Freddy Fyffes. Moya Whitehead, Headteacher at The Hills Academy, said: "We were delighted to be runners-up."