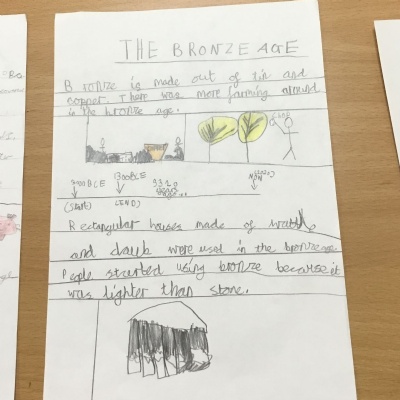 Year 3 have had a very exciting term in history looking at Prehistoric Britain. It has been interesting to see how different life was in the Prehistoric period.

We began looking at the Stone Age and in these lessons we learned about hunter-gatherers, cave paintings and the first farmers. After this, we studied the Bronze Age and focussed on why it was called the Bronze Age. We learnt that bronze became more common because it was stronger and easier to shape than stone. People made it out of copper and tin. Finally, we looked at the Iron Age. In the Iron Age, people moved to hillforts for protection as having weapons became popular. Hillforts were easier to protect as they were built at the top of hills so enemies could be seen from far away. We have been reading a book called The Bedford Chronicles and this told us that there had been a hillfort near Mowsbury Park.

To finish the unit on Prehistoric Britain, we made posters on the Stone Age, Bronze Age and Iron Age.