WHAT A BUSY YEAR WE HAVE HAD! 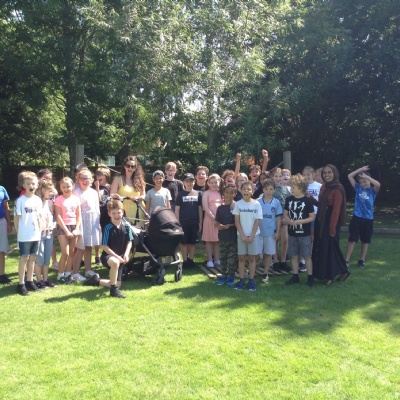 The final blog from Year 4 is written by some of the children in 4D :)

Although online learning was a struggle for most of us, we got through it together. As much as it was hard for us it was even more of a struggle for the teachers.

During homelearning, we read Kensuke’s kingdom and Mr Stink. They were very interesting and amusing at times. We discovered different languages even if they weren’t real ones.

Throughout online learning, in maths we learnt about fractions and questions.

During maths, we have learnt about directions which lead us to time and remembering which way the clock goes. We knew if it went to the right it was going clockwise and if it went left it would be anticlockwise. Recently, we did statistics such as pictograms, bar charts, tally charts and line graphs. We especially liked doing the scavenger hunt to find obtuse, acute and right angles in the classroom.

In English we have had lots of fun acting out stories and retelling them through drama. In Kensuke’s kingdom we’ve written re-writes of chapters throughout the book. We’ve also written our own style of Kensuke’s kingdom. Moving on to Mr Stink, during this adventurous book we’ve met different styled characters for example Mr stink, “Mr stink stank he also stunk he was the stinkiest stinker who ever lived!” said by Chloe in Mr stink. We have also learned about poems. For example: odes, rhyming poems.

In history we have learnt about Athens and Sparta. Athens lived in war but Sparta lived in peace. We have been comparing Anglo-Saxons to Ancient Greeks. During science, we have been learning about sound and how it travels. Sounds are produced when objects vibrate. In DT we have been making juggling balls. Although the majority of us don’t know how to juggle, we’ve been making them anyway. First, we had to tie die our plain white fabric. After it dried, we cut out our templates and pinned them ready to sew. Then we sewed them making sure we didn’t prick ourselves.