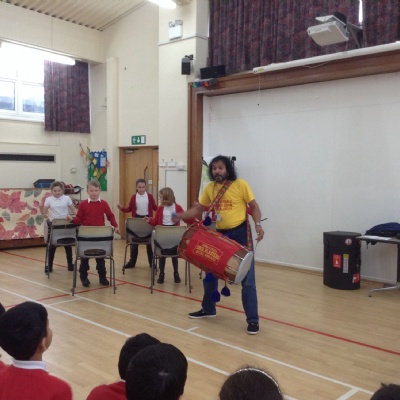 On Thursday 10th of January, year 3 and 4 had an Indian drumming session with King G.

We each had a few goes on the drum which is called a Dhol. You used two sticks to hit the two sides of the Dhol and they were called the Dillie and Dalla. We had to be very careful to sue the stick properly so we did not damage the skin on one side of the drum. King G taught us a rhythm that we had to clap to, it went very well with drum beat and we were also taught lyrics to go with it.

The drum was from Punjabi which translates to five rivers in Indian. Each class went into the hall at separate times so we had enough time to have a go and practise our rhythm and beat on the drum. It went really well and we all enjoyed it. All the classes had a different rhythm to perform with different dance moves that went with the clapping.

King G taught us some of the best drumming we have seen. We did a performance to the adults once we had finished practising, it was great and we all enjoyed it very much. King G was excellent and he also told us that he has played for Sir Richard Branson for the very first flight of Virgin, HRH Queen Elizabeth II and Prince Charles as well as this he has also played with the famous rapper Snoop Doggie – Dog at Live Aid.