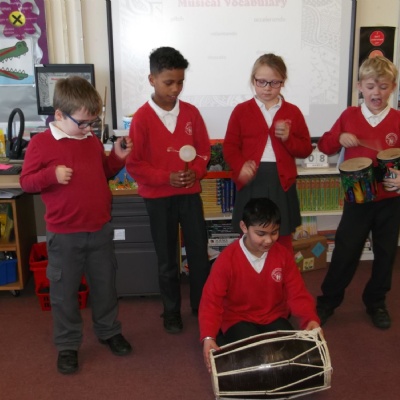 This term in Year 4 we have been learning about traditional Indian music.

We have looked at the history of their music and learnt that much of the music was developed in temples and royal palaces and that it is often improvised.  We explored the instruments such as the dhol, sitar, tambura and tabla and found out that Indian classical music has three parts; the melody, the  accompaniment and the rhythm.  We also looked at how writing the music compares with western music and found that it is written in tals or talas instead of bars and each tala are cycles of between 4 and 16 beats.

In small groups we composed our own piece of music which represented an animal... we had lots to consider, such as how did the animals move, how big they were and what was the animal going to be doing to go alongside our music.

It was lots of fun and also quite tricky as not only did we have to make up our music but we also had to consider each others ideas and make sure we were using good teamworking skills!

We all composed and performed fabulous music and the other children in the class even managed to guess the animals we were representing.

Have a look HERE at some more photographs of our lessons.