My Adventures at Hilltops by Alfie 4D 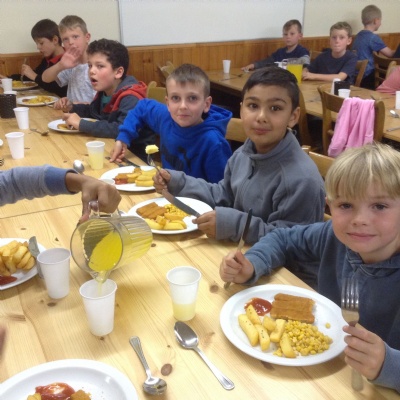 This is Alfie's report of his trip to Hilltop in Sheringham, Norfolk.  He is in the photo at the back waving, wearing a grey t shirt.

We stayed there for 2 nights and three days.

It all began on a cold dark morning at the Hills Academy, Bedford.  We were waiting for the bus to arrive and all the children to arrive so we could go on our trip to Hilltops. I have never seen so many suitcases pillows and sleeping bags in my whole life! While they were packing everything we were chatting to our friends tiredly. But then we all got really excited and emotional. We got really excited because Mrs Foster said that we could go on the coach. But before that we got emotional because Mrs Foster said that we needed to say goodbye to our mummy’s and daddy’s and we really didn’t want to leave them because we loved them so much. But when we were on the coach and we were driving we all felt a bit better because we were so excited! Anyway on the way, at times it was quite peaceful because a lot of people were asleep. But at times on my table it was quite noisy but a nice noisy because we were chatting quite a lot.  But it was quite funny chats.

When we got there it was so exciting because you could see all of the things that we would be able to go on and not be able to go on. But anyway the things that we weren’t allowed on looked quite scary.  When we got off the coach some people helped get the suitcases pillows and sleeping bags of I was one of them. The people that helped get the bags and things off got to see the games room first, it was really cool. They had a pool table, a football table and a tennis table. They were all really fun. Then we all sat in the quiet room until the lady came up to say who was in our rooms and what we were going to be doing in the time that we were there. We got to go to the sea and do some fun things there like make sandcastles and make a wall out of sand and stop any water coming through. That was really fun. We also got to do high ropes. What you had to do is you had a harness and a special big key that you had to connect to the wire. When you were walking you were higher than the GROUND!!!   On one of the evenings we went outside in the dark and we played games.  One of the games was called, ‘Owls and Mice’.  It was similar to ‘Hide and Seek’.  The food was delicious.  My favourite meal was sausages with beans. I also really like the apple crumble with custard.

Before we came home we had to pack all our clothes into our suitcases. I had to sit on my case with 4 of my friends to do my case up!  The friends who I shared a room with were good fun and we won a prize for having the tidiest room.  In my room there was me, James, Ahmed and Kyan.  I pulled my case to the coach and helped to put the cases into the boot.

The journey was amazing because we had lots of fun chatting together.  Mrs foster was very kind because on the way back she gave us some sweets. They were very nice!!!  Eventually we got back to school and the mummy’s and daddy’s were waiting for us.  I felt happy to see Mummy, we had a big hug when I got off the coach.

Thank you to all the adults who took us all away to Hilltops.  I had a wonderful time.