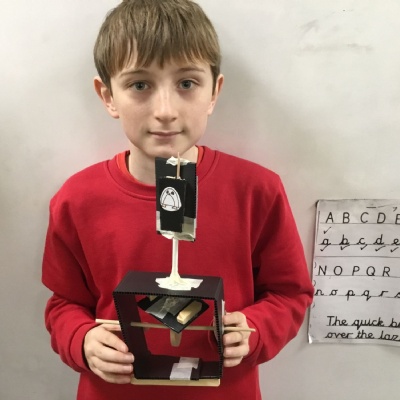 Last week, pupils in Year 6 completed a project in D.T over two days on building their own CAM toy. Their first step was to watch a video on how to make one and discuss with the class afterwards. They used the template from the video to make a prototype and get an understanding of how different mechanisms work. They also learnt what a follower and CAM was.

In their foundation books, they looked at the different CAMS and followers they could use. There were four CAMS: a circle CAM, a snail CAM, a pear CAM and a heart-shaped CAM. There were also three followers: a flat follower, a pointed/knife follower and a roller follower.

After discussing what they had learnt, each Year 6 pupil created two different designs and then, based on their favourite design, made a final decision made on the CAM toy that they would build.  Many did different designs and some were similar to the prototype in the video.  They also had to annotate their designs to make it clear to the teacher (and themselves) what to do. Again, some pupils used different followers and different CAMS; however, this time, the majority of the class used circle CAMS and flat followers as they were probably this easiest type to go for.

Once the teacher had checked their work, they set them off on the best part: the building task. Firstly, Year 6 pupils had to get the base of the toy made, which was a key part - without a base, there would be no mechanisms for the toy to work. They had to use this piece of plastic called Corex, which was hard to cut, and when this was finished, they gathered what they needed to build the actual CAM toy.

One of the designs involved a dragon, where the CAM control allowed for fire to breathe out. The mechanism here was fairly simple - at the bottom of it, a small circle CAM sat connected to a bigger circle CAM, which made the handle. On top of the small circle CAM sat a flat follower made out of Corex. A small bit of dowel (a long bit of wood that is thin) went in halfway through the Corex and was guided by a cut-to-size paper straw to guide the dowel to prevent the follower from slipping. The fire was super-glued to the dowel and, when the handle turned, the fire- breathing dragon came alive!

Lots and lots of wonderful and unique designs were made: a bird hatching out of an egg; someone created water spritzing out of a whale; and one of the best ones was the wind up Jack in the Box!  One of the best D.T lessons ever!

Check out the photos HERE for all the different designs and toys that were created.