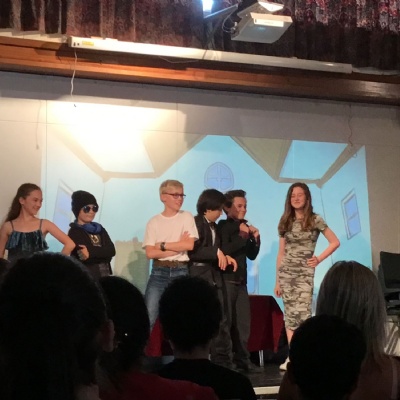 This half-term, Year 6 have been preparing a fabulous production; they have been celebrating the end of SATs and the end to their time at The Hills Academy. They have been sharing it with the school and their parents and they hope that they have enjoyed it.

This production ‘The X Factory’ stars a group of students trying to prove their worth to the Ofset inspectors, who are trying to close their school. The show is bound to be a treat for anyone who watches: it contains various songs and plenty of jokes. In addition, several students perform solo pieces as part of the production also.

The children have worked extremely hard to perfect their performance over a number of practice sessions helped by the Year 6 production team. They couldn’t have done it without any of them and they wish to extend their thanks to all of the staff that have supported them in preparing the X Factory production.

We speak for every child in Year 6 when we say that we have loved our time at The Hills Academy and we feel that the X Factory is a fitting swan song to end our time at the school.

Have a look HERE for some photo's taken during the performance