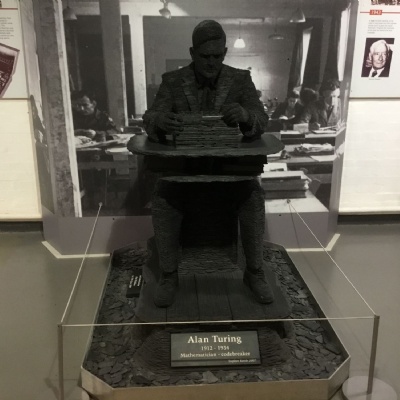 Year 6 visited Bletchley Park on Thursday 7th February. We arrived at 09:30am and were eager to start learning about the incredible events that took place in the tiny huts at Bletchley during WWII.

During our visit, we had the opportunity to: explore the various exhibits and points of interest at Bletchley Park, take part in an interception to intelligence workshop, learn to read and translate Morse Code, and receive a guided educational tour from a knowledgeable staff member named Harold. In addition, we were able to view replica enigma and bombe machines that were used to encrypt and decrypt messages during WWII. We even got to set up a replica enigma machine and create our own encrypted messages.

Due to the secrecy, many of the heroic efforts of the men and women working at Bletchley Park went unnoticed when the war ended. To honour these important individuals and their war efforts, we suggest that you visit Bletchley Park. It is worth a visit.

Alan Turing is often the most spoken about and well-known individual that contributed to the war efforts at Bletchley Park. Well, he did design and build the bombe machine which led to the cracking of enigma. So he deserves to be well-known and spoken about. However, there were so many other vital contributions by many important individuals. Their combined efforts were a decisive factor in Britain being victorious in WWII. The role of the women during the war for example were unparalleled. Double first female mathematicians were not only tasked with cracking enigma, but they were also tasked with delivering encrypted and decrypted messages to different locations on time by motorcycle. During your visit, please take the time to learn about the contributions of these unknown heroes.

Click HERE to see some photos from the day.

We would like to thank the volunteers that helped us with our visit to Bletchley Park; the day couldn’t have taken place without you and we had a great day!

Blog written by Daniel and Ivana