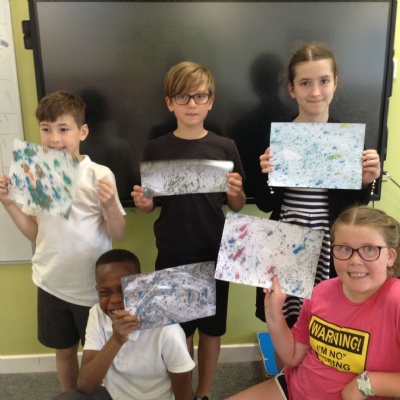 Erin: Every day, we had a range of challenges set by the Taskmaster. We had lots of random tasks like finding the biggest object to lift with lollipop sticks.

Sadie: We had some half portraits of different animals. We had to pretend there was a mirror and sketch the other side.

Toni: We also did marbling. We went outside and put oils on top of water. We mixed it a bit and then put our paper in the water to make a picture.

Maryam: One of our Taskmaster tasks was to design a brand new handshake and work together to hold the heaviest object on 10 sheets of loo roll.

Bella: We went swimming and instead of a normal lesson, we were able to play in the pool with lots of floats.

Khloe: We went into the garden and we made some s’mores and played lots.

Aiden: We had more tasks to do like standing up when we thought it had been 100 seconds exactly. It was tricky!

Cherry- Rose: We did tie-dye. We were called up a few at a time. We could do spiralling, marbling, polka dots or stripes. I did polka dots on a white t-shirt.

Sonia: We made animal collages. We scribbled on paper randomly then put watercolour on top to see what happened. Then we added the detail to the eyes and nose or beak and stuck it onto the paper which we cut into strips and put on card.

Mikel: In the afternoon, we relaxed by watching a movie called Jimmy Neutron.

Charlie: We still had our daily team building tasks. My favourite was guessing what objects were inside a box. We could only feel using our hands.

Keira: We made pictures using watercolour then added paint and blew through a straw to make a tree.

Aiden: We went out to play in the afternoon with a parachute.

Dzesika: We had ice lollies because it was so hot!

The children had a fantastic week and produced some super work!

Have a look HERE at some photos from our week