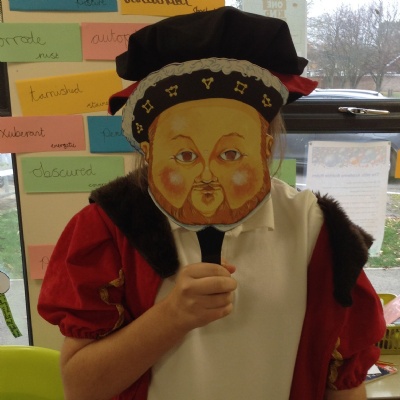 In year 5, in history, we have been looking at Henry VIII and what his life was life in the past. Did you know that Henry is the most famous monarch in the English history?

He was King of England from 21st April 1509 up until 28th January 1547 (that means Henry was king for 38 years until Edward VI took over when Henry died at the age of 55). Henry was the second oldest son to Elizabeth of York and Henry VII. He was born in London, in Greenwich, on the 28th June 1491.

Henry is most well-known for having 6 wives. Their names were Catherine of Aragon, Anne Boleyn, Jane Seymour, Anne of Cleves, Catherine Howard and Catherine Parr.

Henry was a really nasty man to some of his wives as he cut Anne Boleyn’s head off as well as also beheading Catherine Howard. He divorced Catherine of Aragon because she didn’t produce a son that Henry wanted to become the next king. On top of all of that, he divorced Anne of Cleves because Hans Holbein created a flattering picture of her but when Henry saw her in real life he didn’t like her appearance. Unfortunately, Jane Seymour died when Henry had married her but so far she was the only princess that had produced a boy that was Edward VI! When the king married Catherine Parr, Henry died so there was no more wives to come! A way to remember the six wives is by saying divorced, beheaded, died, divorced, beheaded, survived.

Henry became king when his brother Arthur, Prince of Wales, passed away. Henry was crowned king at the age of eighteen (that is very young). He was very surprisingly tall. Henry was over 6 foot and 2 inches. As Henry created the Church of England, people who didn’t follow Henry got executed. Over 70,000 people got executed for doing this. When he was younger, Henry VIII enjoyed playing sport such as rugby, wrestling, tennis, riding, hunting and jousting. He also spoke 3 other languages which were French, Latin and Spanish. One day, when the king was hunting, he had really hurt his leg. It had a huge ulcer on it, oozing blood and disgusting puss pouring out of it. Due to this accident, the following morning the king had three men to carry him out of bed as he wasn’t able to.

Some facts about the Tudors from Mia: